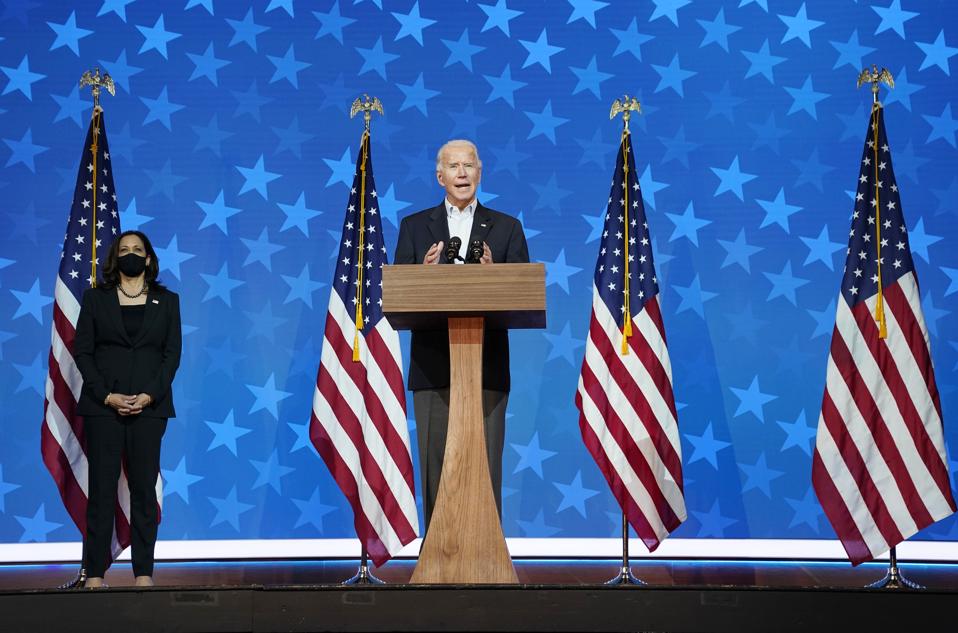 Although the race hasn’t officially been called, it looks likely that Joe Biden will be the 46th President of the United States. There has been a lot of hand-wringing in the oil industry about the consequences of a Joe Biden win, so let’s discuss those today.

Here is some context I like to use to frame the discussion. President George W. Bush was formerly a Texas oilman. His Vice President, Dick Cheney, was the former Chairman of the Board and Chief Executive Officer of the oilfield services company Halliburton HAL .

Barack Obama took office in January 2009. He had campaigned on combating climate change. He implemented lots of policies designed to encourage the use of renewable energy. He was often openly hostile to the oil industry, slowing down pipeline permits and placing more federal lands off-limits to drilling.

What happened? U.S. oil production increased each year during the first seven years Obama was in office. The U.S. saw the fastest growth of oil production in history, as well as the largest expansion under any President.

From Obama’s first year in office through his seventh, U.S. oil production rose by nearly 90%. U.S. natural gas production also skyrocketed. The price of natural gas, oil, and in turn gasoline, all plunged as production surged. In 2008 gasoline futures averaged $2.45 a gallon. By 2016, that had fallen to $1.40 a gallon.

What can we conclude? I believe the logical conclusion is that a president just doesn’t have a lot of impact on the oil markets. Or, if there is an impact, it takes years to materialize.

Why did President Obama’s tenure see such an explosion in fossil fuel production? Because hydraulic fracturing — which saw significant development under George W. Bush — matured under President Obama. Production increased despite President Obama’s policies, and not because of them.

That brings us back to Joe Biden. He campaigned on similar themes as Barack Obama. He will likely implement similar policies. We will probably see slower approval of pipelines, and less drilling on public lands. Despite his flip-flops on the issue, we will not see a ban on fracking. That was never a realistic option.

But Biden’s impact on the overall oil industry is going to pale in comparison to the impact of the ongoing Covid-19 pandemic on the industry. The biggest impact Joe Biden could make on the oil industry would be to get the pandemic under control as quickly as possible, which would allow demand for oil to rebound somewhat. No other policy he may pass will have a greater effect.

I think Joe Biden’s impact on the oil industry will be like that of his predecessors. He will pass some policies that might have a small, incremental impact one way or the other, but those things are just noise against macro factors like new technology (whether it’s fracking or more electric vehicles) and a raging pandemic.