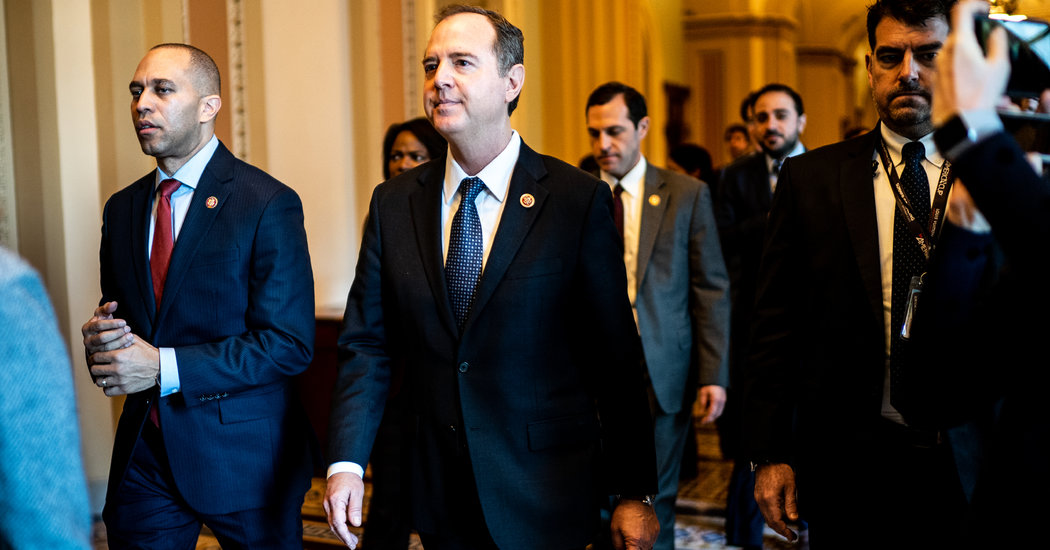 WASHINGTON — After ceremonially opening its impeachment trial of President Trump last week, the Senate reconvenes on Tuesday to begin what is expected to be a bruising partisan fight over the charges that the president abused his office and unconstitutionally obstructed Congress.

The seven Democratic House impeachment managers could begin making their case on the Senate floor on Wednesday, and will be followed by the president’s legal defense team. But first, senators will haggle on Tuesday over the trial rules introduced on Monday by Senator Mitch McConnell, Republican of Kentucky and the majority leader.

What we’re expecting to see: The Senate’s debate over rules and procedures governing the trial will most likely culminate in a party-line vote to adopt Republicans’ preferred approach. The House will also file a rebuttal to Mr. Trump’s written defense.

When we’re likely to see it: A draft of the proposed Republican rules was released Monday evening, but debate will not begin until the trial convenes at 1 p.m. Eastern. The House’s brief is due at noon.

How to follow it: The New York Times’s congressional team will be following the developments on Capitol Hill and reporters covering the White House will get the latest from Mr. Trump’s defense team. Visit nytimes.com throughout the day for live coverage.

The rules debate will set the tone for the trial.

When President Bill Clinton went on trial in the Senate 21 years ago, senators came together to adopt a resolution governing the first phase of the trial in a vote of 100 to 0, setting a bipartisan tone they hoped would guide the Senate and the country through a contentious process.

Not this time. Republicans and Democrats are bracing for an initial battle over witnesses and other measures that will almost certainly fracture the Senate along party lines on Day 1.

Mr. McConnell’s proposed rules put off a debate over whether to call witnesses and compel new evidence until the middle of the trial.

Senate Democrats say that may have worked in the past, but this case is different. Mr. Trump systematically blocked testimony in the House impeachment inquiry from a dozen government officials and refused to hand over a single document, and now, Democrats say, the Senate has an obligation to set it right.

They are also displeased that Mr. McConnell is trying to speed up the trial by capping the number of days the managers and defense lawyers have to present their cases, and that his proposal would not automatically include the House’s impeachment evidence as a part of the Senate trial record.

This will not look like a typical Senate colloquy.

Given the unusual requirements of a Senate impeachment trial, the resolution will be debated in the open not by the senators themselves, but by the House managers and the defense team, acting as proxies for the Democrats and Republicans.

If senators want to engage in their own debate, they will have to go into private session, closing the Senate doors, kicking out reporters and shutting off the television cameras until they reach a resolution.

Democrats are ready to force amendment votes that would call witnesses or evidence to pressure moderate Republicans like Susan Collins of Maine, Lisa Murkowski of Alaska, Cory Gardner of Colorado and others, but Mr. McConnell is expected to hold all 53 Republicans to his position. Each such vote could take up to two hours.

Both sides expect debate to go late into the night.

Oral arguments could begin as early as Wednesday.

If the Senate adopts Mr. McConnell’s proposal on Tuesday, the trial could move promptly to opening arguments on Wednesday.

As the prosecution, the House managers will present their case first. They will lay out in detail their case that Mr. Trump pressured Ukraine to announce investigations into his political rivals by withholding almost $400 million in military aid and a White House meeting for its leader — and then concealed it from Congress by blocking witnesses and documents.

Next up will be the president’s defense team — including Ken Starr, the former independent counsel who pursued Mr. Clinton, and Alan Dershowitz, a famed constitutional law scholar — who intend to argue that Mr. Trump was merely acting in the United States’ best interest and that the charges constitute little more than political attack by Democrats.

Like in 1999, both sides are expected to technically have 24 hours to do so. But unlike then, Republicans will insist that they squeeze that time into just two marathon days apiece instead of spreading each side’s argument over three or four days. The opening arguments could be completed on Saturday, or slip into next week.

A fight over calling witnesses is looming.

The sparring over witnesses and documents beginning on Tuesday will most likely take center stage at some point next week, after opening arguments are complete and senators have a day or two to question the prosecution and defense.

Under Mr. McConnell’s proposed rules, senators will take an up-or-down vote on whether to even consider calling new witnesses and documents. If a majority says yes, the managers and defense lawyer would then offer individual proposals for votes. If the majority votes no, the trial could move toward a final debate about innocence and guilt based on the evidence already in the public record.

The outcome is anyone’s guess. Democrats need four Republicans to join them if they have a shot at compelling new evidence. Seeking to pressure moderates, retiring lawmakers and those up for re-election in swing states, they have argued aggressively and repeatedly that a trial without witnesses would not only be unprecedented but essentially a Senate-sponsored cover-up of Mr. Trump’s actions.

But even if senators do vote to call witnesses, the president could try to use his executive power or the courts to stop their testimony, delaying the trial indefinitely. The pressure from Republican leaders, who want the trial over promptly, will be strong to skip witnesses regardless.

Or conservative Republicans could try to strike a deal, pairing one witness Mr. Trump wants to testify, like Hunter Biden, with each one that Democrats and a handful of Republicans succeeded in calling. The trial could quickly spool out in unforeseeable directions.