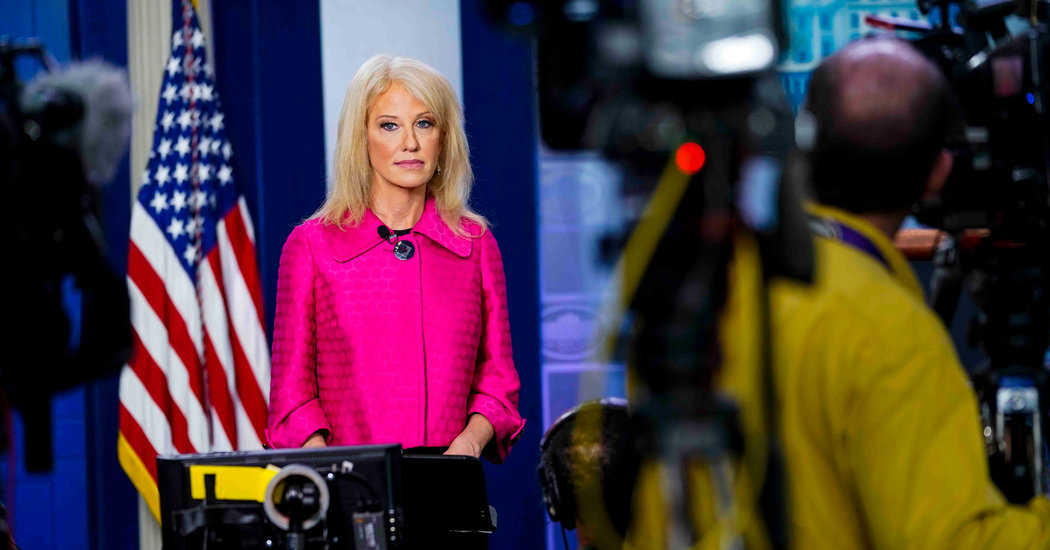 WASHINGTON — George T. Conway III has described the work of his wife, Kellyanne Conway, for President Trump in terms usually reserved for hostage situations: brainwashed by a cult, suffering from Stockholm syndrome, an overwhelmed mother protecting a destructive man-child.

And if you think it’s all shtick, some wink-and-nod act by a couple who fights by day and snuggles by night, planning a payday after Mr. Trump leaves the scene, think again, say some people close to America’s oddest political couple.

“Those who think this is a 14-dimensional chess game are mistaken,” said Rick Wilson, who with Mr. Conway and several other Republicans formed the Lincoln Project, an effort to beat Mr. Trump in the 2020 election.

Mr. Conway “has taken unequivocal and irreversible actions that have established his bona fides as someone who opposes Donald Trump, and she’s going to be for Donald Trump until the last dog dies,” he said, adding a question that many Americans have asked themselves about the Conways: “Who knows the secrets of the human heart?”

In a sense, the passions in the Conway household have come to represent the societal agonies of the Trump era, a couple and a nation deeply divided, unsettled by the storms around the presidency, and asking themselves, when it’s all over, can there be reconciliation?

The Conways bring to mind a previous Washington “It” couple: Mary Matalin, who worked for President George W. Bush, and James Carville, the Democratic strategist who helped engineer President Bill Clinton’s 1992 victory over Mr. Bush. Ms. Matalin and Mr. Carville turned their political dissonance into a lucrative brand, joking about their vast differences.

The Conways agree politically on most things because Mr. Conway, for all his anti-Trump activities, remains deeply conservative. But the couple does not appear to be having much fun.

“Coming of political age in 1992 is significantly different than coming of age in 2017,” Mr. Carville said. “Trump people have much more of a sense of personal assault or grievance, and the Trump opponents have a high, high dose of doing the right thing for the country. You can hardly even tell jokes about it anymore.”

Ms. Conway, 53, Mr. Trump’s senior counselor and 2016 campaign manager, has largely held her tongue about her husband, though she told The Washington Post in 2018 that his sniping “disrespects his wife.”

In recent months, Mr. Conway, 56, a constitutional lawyer by trade and Trump opponent by conversion, has become more embittered, and more public. During the presidential impeachment, he took to CNN and Twitter as a commentator, calling Mr. Trump a “criminal,” “pathological liar” and “Idiot-in-Chief.”

To mark Mr. Trump’s acquittal by the Senate, Mr. Conway wrote a sarcastic, bitter column, concluding, “I believe the president’s call was perfect. I believe he is deeply concerned about corruption in Ukraine.” Mr. Conway live-tweeted his derision as the president celebrated last week in the East Room of the White House. “Let it out, @realDonaldTrump. Let it all out,” he mocked.

For someone who labored in Republican legal vineyards for decades — in the 1990s, he was a lawyer for Paula Jones, who accused Mr. Clinton of sexual misconduct — Mr. Conway did not cut much of a swath in Washington social circles. He rode his wife’s coattails into the nation’s capital.

But of late, he has surpassed her on Washington’s party circuit.

“She was the superstar for two and a half years, and now George is the superstar,” said Sally Quinn, a journalist, author and Washington hostess who has been inviting Mr. Conway, but not Ms. Conway, to her parties in Georgetown.

The Conways met in the summer of 1999, when Mr. Conway was a securities lawyer and partner at the New York firm Wachtell, Lipton, Rosen & Katz and Ms. Conway was a Republican pollster who appeared frequently on television. Mr. Conway told a mutual friend, the conservative commentator Ann Coulter, that he wanted to meet Ms. Conway, known then by her maiden name, Kellyanne Fitzpatrick. The future Ms. Conway drove out to a Hamptons beach house, rented by Ms. Coulter, and the couple remained planted at the house’s kitchen table, chatting for hours.

They married in 2001 and moved into Trump Tower in Manhattan. Mr. Conway impressed the future president by taking his side in a condo board battle over removing the name “Trump” from the building, and he introduced Ms. Conway to Mr. Trump.

Politics was less bruising then. In 2005, Ms. Conway teamed up with Celinda Lake, a Democratic pollster, to write a book about how American women were erasing political lines. By reputation, Ms. Conway was smart and empathetic, the type who remembered birthdays and weddings.

The Conways now have four children: the twins, George IV and Claudia, 15; Charlotte, 11; and Vanessa, 10; and a pair of Corgis, Skipper and Bonnie, which Mr. Conway nicknamed Concerned and Troubled after the terms that Senator Susan Collins, Republican of Maine, has used to describe her reaction to Mr. Trump’s behavior.

Friends say the Conways are staying together for their children, although the couple is not always in the same city. Mr. Conway spent chunks of time last year in New York before leaving his firm, while Ms. Conway remained in Washington, where the Trump crowd has largely blackballed her husband.

In November, Mr. Conway attended a “Resistance” party at the New York apartment of Molly Jong-Fast, an author and daughter of Erica Jong. The comedian Kathy Griffin posted a photograph on Instagram of Mr. Conway hiding coyly behind the liberal journalist Soledad O’Brien. Nearby were E. Jean Carroll, a writer who has accused Mr. Trump of rape, and the Hillary Clinton stalwart Philippe Reines.

In Washington, Mr. Conway tends to hole up in his home office, writing opinion pieces and firing away on Twitter. In a July piece titled “Trump Is a Racist President,” he wrote about the first time he heard someone tell his mother, who emigrated from the Philippines, “‘Go back to your country.’”

The gulf between the Conways developed slowly before turning into a chasm. After Mr. Trump’s victory, the Conways jumped into Washington with both feet, buying a 15,000-square foot house with eight bedrooms and 11 bathrooms. “Kellyanne Conway Just Bought This $8 Million D.C. Mansion,” blared Town & Country magazine, through Mr. Conway’s legal partnership accounts for most of the couple’s net worth of about $40 million.

Mr. Conway wept for joy on election night and called his wife’s achievement “the best thing that ever happened to her.” He turned down two potential posts in the Justice Department, calling the administration “a dumpster fire,” though he told the president at the time that he supported him.

In those days, Ms. Conway went out alone, or with Adrienne Arsht, a philanthropist and arts patron with homes in Miami and across the street from the Conways. Ms. Arsht, who calls Ms. Conway “a lovely neighbor, a great mother” and “a fabulous cook,” played down their relationship.

“Our garages face each other, so why not go out together to save on emissions?” she asked.

Early on, Mr. Conway tweeted his disapproval of the president’s tweets about the travel ban, then hastened to tweet his support for the president and “my wonderful wife.”

“It was like, ‘Oh, I love your shoes and what a great bag, blah blah,” Ms. Quinn recalled, until she asked Ms. Conway about her husband, and Ms. Conway, she said, grew angry that Ms. Quinn had even brought him up. “She just took off on all three of us,’’ Ms. Quinn said. “She really went crazy.”

“I said, ‘Kellyanne, you’re married, and you’re working for the president, and he’s writing against the president,” Ms. Quinn recalled. “‘Guess what? This is a story.’”

The next month, the Conway marriage appeared to have become an issue in the White House. Mr. Trump had spent the weekend of March 16 retweeting conspiracy theorists and insulting Senator John McCain when Mr. Conway tweeted, “His condition is getting worse.”

The next day, Brad Parscale, who now manages Mr. Trump’s re-election campaign, tweeted that Mr. Conway “hurts his wife because he is jealous of her success.” The president piled on, “A total loser!”

Mr. Conway then gave an interview to The Washington Post, saying that he tweets “so I can get it off my chest and move on with my life that day.” He added, referring to his wife, “Frankly, it’s so I don’t end up screaming at her.”

Mr. Trump clapped back: “George Conway, often referred to as Mr. Kellyanne Conway by those who know him, is VERY jealous of his wife’s success & angry that I, with her help, didn’t give him the job he so desperately wanted. I barely know him but just take a look, a stone cold LOSER & husband from hell!”

It fell to Ms. Conway to spin Mr. Trump’s attacks on her spouse.

“He left it alone for months out of respect for me,” Ms. Conway said of the president in an interview with Politico. “But you think he shouldn’t respond when somebody, a nonmedical professional, accuses him of having a mental disorder?”

Mr. Conway has not let up. In October, he used clinical terms in The Atlantic to say Mr. Trump’s narcissism made him unfit for office.

Mr. Conway “was one of the last to leave,” Ms. Quinn recalled. “He was just glowing, you know?”