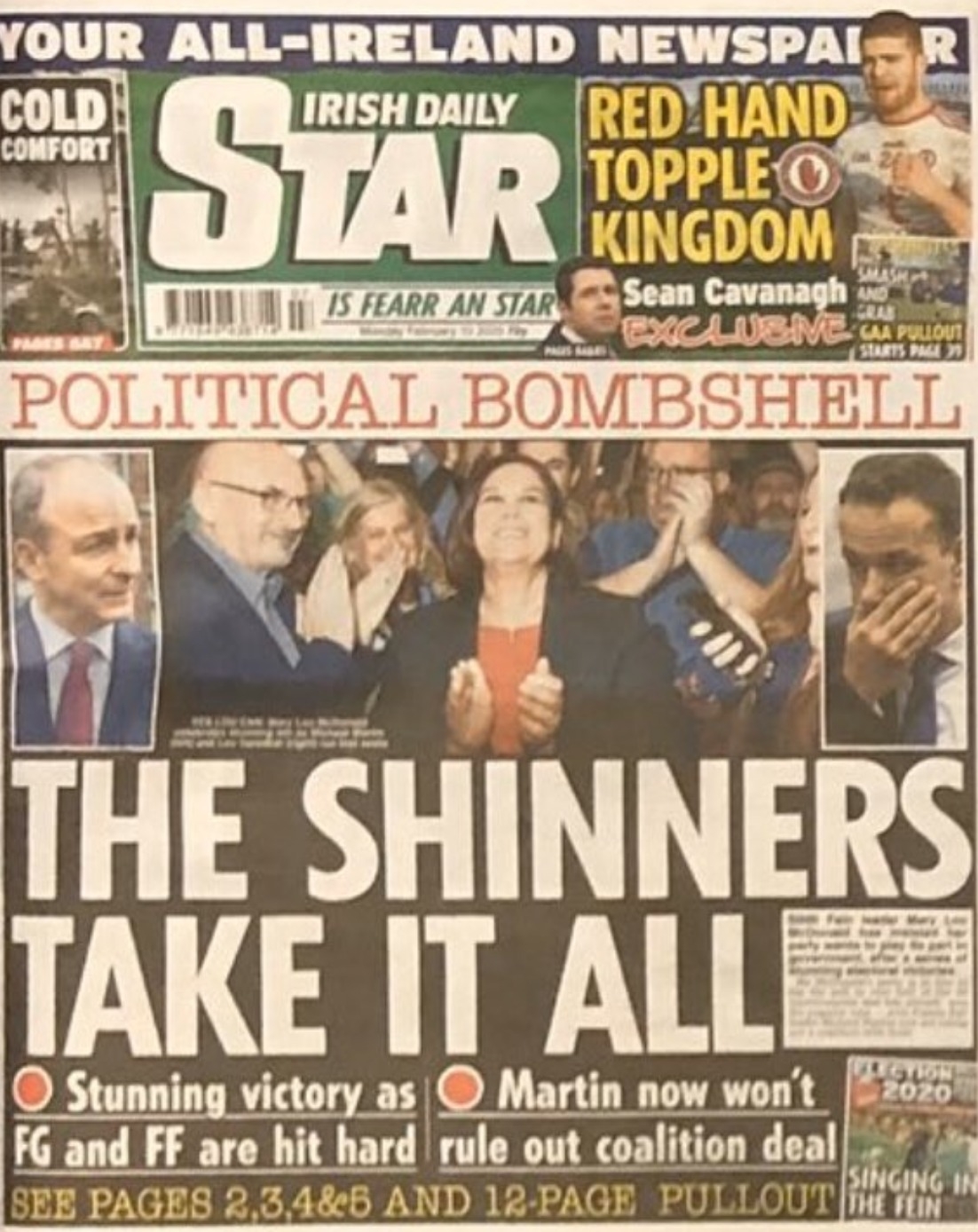 A couple of weeks back, for the first time in years I happened to be at the Royal Dublin Society’s handsome Georgian headquarters. It gave no indication it was about to play host to a political earthquake – one deftly summed up by the Belfast edition of the Dublin edition of the London edition of The Daily Star (I think I’ve got that right) in a headline worthy of the red-tops’ golden age (at least for Abba fans):

The Shinners Take It All

And they pretty much did. In Saturday’s Irish election, Sinn Féin won a plurality of the vote, beating both main parties, the ruling Fine Gael and the opposition Fianna Fáil, and cleaving in half a century-old two-party system dating back to the founding of the Irish Free State. Sinn Féin is, technically, an older entity, founded in 1905 by Arthur Griffith (as I’ve mentioned before, my great-uncle was his lawyer). The name translates to English literally as “Ourselves”, and less literally as “frontmen for the terrorist IRA” (which is why my aforementioned great-uncle was given a full IRA “military” funeral). But this weekend it ramped up its votes – urban, rural, across the map – mainly among electors too young to remember the bombings and kneecappings and tar-&-featherings of the Seventies and Eighties – anymore than their middle-aged parents remember the utterly pointless Irish Civil War from whose opposing sides Fianna Fáil and Fine Gael emerged. Fine Gael means “Tribe of the Irish” and Fianna Fáil “Soldiers of Destiny”, Irish politics being too romantic for anything so prosaically denominated as Conservative or Liberal or Socialist Parties.

No one saw the Shinner winners coming, including the Shinners: They ran only 42 candidates, and you need eighty-one to form a majority government. Under Dublin’s let’s-be-different-from-the-English system, the map is divided into 39 multi-member constituencies, elected by “first preference” votes, then “second preference”, etc. So far 37 Sinn Féin candidates have been elected, so they pretty much cleaned the “mainstream” parties’ clocks on first preference – and, in the constituencies of both party leaders, forced the Taoiseach and the Opposition Leader into the double humiliation of second place. Which has never happened before.

Said Taoiseach is Leo Varadkar, a gay half-Hindu said to represent “the new Ireland”. He spent the last three-and-a-half years doing his EU masters’ bidding and being a hard-ass to Theresa May on Brexit …only to discover his electorate are entirely relaxed about Brexit but hopping mad about a bunch of neglected issues far closer to home, such as housing. The people have spoken, but what did they say? Are they signing on to SF’s official position of hyper-republicanism and Irish unification? Or are they voting for the most explicitly nationalist party for the same reasons as their Continental counterparts do (mass immigration and loss of culture)? Or do they just like the promises of more socialism and social justice? Or are they merely protesting a tired status quo in favor of a change they can’t quite specify?

Whatever the answer, it puts Sinn Féin’s opponents in a quandary. Because of SF’s unsavory associations, Fine Gael and Fianna Fáil share a formal position of refusing to enter into coalition or confidence-and-supply agreements with the Shinners. So the old parties now have a choice:

They themselves can form a “Grand Coalition”, as Angela Merkel and her opponents did to keep the supposedly unrespectable Alternative für Deutschland out of power. On the other hand, this tends to make the mainstream parties even less popular and even more of a closed-door club, while giving the unrespectable guys the imprimatur of Official Opposition and government-in-waiting.

Or, as various of Mr Varadkar’s TDs are already hinting, you can abandon the pledge and bring Sinn Féin into government. There will be a lot of sleepless nights in the darker corners of Erin at the thought of the hard men getting access to the government security files – and it would also present certain challenges for Anglo-Irish security cooperation, given that it’s mostly the Shinners’ chums they cooperate on (not least for all the bank jobs and organized crime, as Perry notes in our comments).

The party’s new supporters will say, ah, well, that’s the old Sinn Féin: These aren’t the old-school hardcore revolutionary Marxists, but cuddlier populist socialists of a Corbyn/Sanders bent. It’s true that the new leader, Mary Lou MacDonald, is a more appealing face than her predecessor, Gerry Adams. Nevertheless, this weekend has to be accounted a triumph of Adams’ grand strategy. It was he who led the party’s return to electoral politics in the Eighties, initially at Westminster, squeezing out the moderate northern “nationalists” of the SDLP and building up to the current seven seats. With the Good Friday Agreement and the birth of the Northern Ireland Assembly, he completed his takeover of the Catholic vote: The Shinners are currently the second largest party at Stormont, where they’re one seat behind the DUP. With the end of the Troubles, Adams turned his eye south of the border, winning one seat in 1999, then five, then fourteen, then 23, and now (at the time of writing) 37.

Sinn Féin is thus the second most popular party in the north and the most popular party in the south. Indeed, it is the only cross-border party, which is impressive at a time when, for example, the supposedly “British” Labour Party has just been more or less shut out of Scotland. The Good Friday and Anglo-Irish Agreements were designed to buy off soft Northern nationalists by creating “all-Ireland” bodies of varying degrees of toothlessness. Instead, they’ve led to the creation of an entirely non-toothless all-Ireland body: the new Sinn Féin.

The DUP’s Sir Jeffrey Donaldson, sounding like the very embodiment of a demoralized Unionism, said last night that a goodish showing by the Shinners is no reason to hold a border poll – ie, a referendum on Irish unity, as Ms MacDonald wants. But if the same party dominates north and south, who needs a border poll? Bolstered by the Brexit backstop, Sinn Féin would be in a good position simply to erase the border, in any meaningful sense.

As to all that guff about “the new Ireland”, Ms MacDonald is certainly surfing the same wave of disenchantment with the conventional wisdom of globalist elites that has manifested itself in different ways across the Continent. But the old Ireland is never far away. At the Royal Dublin Society (whose logo remains, oddly enough, Britannia), triumphant Shinners celebrated an historic victory by singing “Come Out Ye Black and Tans”. All together now:

The “new Ireland” has hijabs, abortion, same-sex marriage, and an immigration rate so high ethnic Irish are predicted to be a minority within thirty years. But at least the singalongs never change (although, as Laura Rosen Cohen notes below, a woker anthem might be “Come Out Ye Black and Trans”).

~Mark will see you on the telly with Tucker, tonight at 8pm Eastern/5pm Pacific.

We had a busy weekend at SteynOnline, starting with Mark’s latest Clubland Q&A in which I took questions from Mark Steyn Club members live around the planet on a range of topics from Iowa and impeachment to bombing in Yemen and in Buffalo via Waugh, Wodehouse and wind turbines. You can listen to the full show here. Later he made a rare Friday appearance with Tucker to chew over the deep thoughts of the shallowest candidate – Pete Buttigeig. Kathy Shaidle’s Saturday movie date celebrated a pioneer pop producer, and just ahead of the Academy Awards Steyn’s Sunday song selection offered a classic Oscar loser. The saddest news of the weekend was the death while crossing the street of the great Orson Bean, a terrible end to a stellar career, and just a few weeks after he’d delighted the audience in The Mark Steyn Christmas Show.

What the Capitol Riot Prosecutions Tell Us

Tal Bachman: We Have Met the Enemy, part VII

Why You Should Worry about Inflation