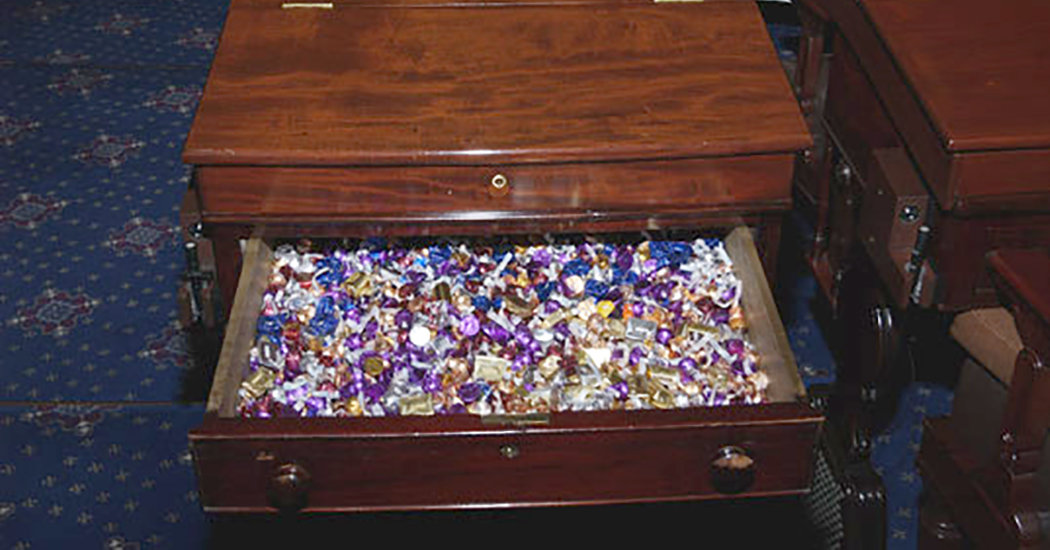 But for at least the rest of January, the 100 members of the United States Senate will have to stick to the impeachment trial diet while they are in the Senate chamber hearing arguments for and against removing President Trump from office.

It consists of milk, water and candy, the only food allowed onto the Senate floor under the chamber’s staid rules, which don’t allow senators to drink coffee, either.

There’s one place to get a sugar fix: It’s known as the “candy desk,” which has been assigned to Senator Patrick J. Toomey, Republican of Pennsylvania, since 2015. It’s on the Republican side of the chamber, in the back row on the aisle — right next to the chamber’s most heavily used entrance.

“The candy desk is bipartisan,” Steve Kelly, a spokesman for Mr. Toomey, said in an interview Tuesday night. “It’s open to Republicans, Democrats and independents.”

As the keeper of the candy, Mr. Toomey keeps it stocked with confections from his home state, including Hershey’s chocolate bars, Rolos, 3 Musketeers, Milky Way bars, peanut butter cups made by Reading, Pa.-based R.M. Palmer Co. and Peanut Chews, a staple of the Goldenberg Candy Company, which is now part of Just Born Inc.

“The companies provide them to the office,” Mr. Kelly said. “We take down candy periodically to the staff of the Senate cloakroom.”

The tradition of the candy desk started in 1965 with Senator George Murphy, a California Republican who was president of the Screen Actors Guild and had a sweet tooth, according to his Senate biography.

The last time there was a impeachment trial in the Senate — in 1999 during the presidency of Bill Clinton, who was acquitted — another Pennsylvania Republican, Rick Santorum, occupied the candy desk.

As the Senate weighs the charges against Mr. Trump that he abused power and obstructed Congress, all eyes are on the senators who are sitting as the jury, from their idiosyncrasies to their eating habits.

Senator Bill Cassidy, Republican of Louisiana, caught the attention of Roll Call, the Capitol Hill publication, which wrote on Tuesday that he “munched away on a candy bar with no attempt to hide his forbidden treat.”

“The metallic wrapper glistened each time he raised the bar to his mouth, while he took notes with his other hand. He ate fallen bits off his desk by pressing them into his finger and then licking his finger.”

Senators are free to help themselves to the snack-size candy bars in Mr. Toomey’s desk.

“I haven’t gotten the down low from him on people who’ve visited the desk today,” Mr. Kelly said of Mr. Toomey.

When asked if Mr. Toomey was tempted by the candy stash, Mr. Kelly said the senator has exercised restraint. Still, he added, “He’s been known to enjoy a 3 Musketeers bar every now and then.”