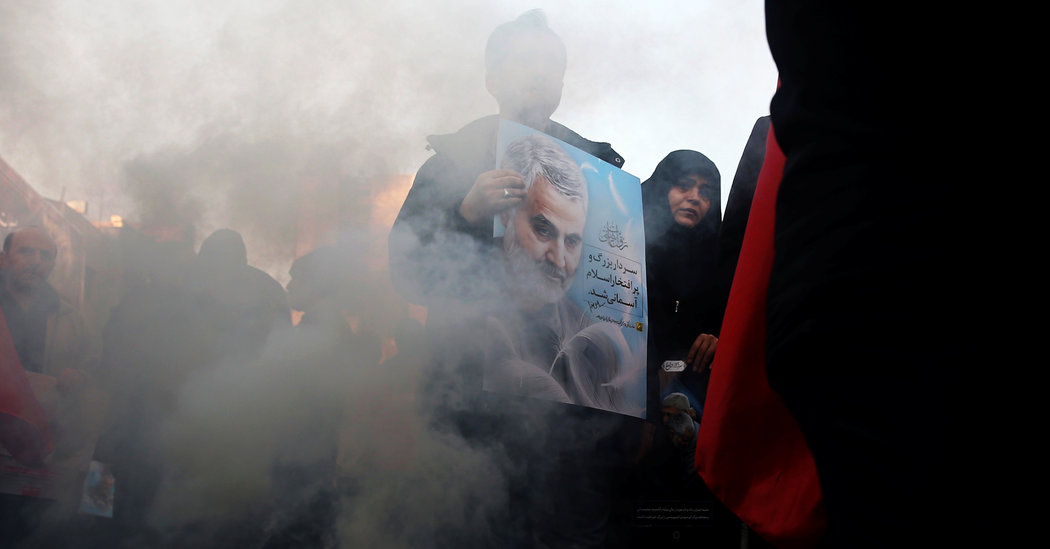 WASHINGTON — The White House told Congress on Friday that President Trump authorized the strike last month that killed Iran’s most important general to respond to attacks that had already taken place and deter future ones, contradicting the president’s claim that he acted in response to an imminent threat.

In a legally mandated, two-page unclassified memo to lawmakers, the White House asserted that the strike that killed Maj. Gen. Qassim Suleimani was “in response to an escalating series of attacks in preceding months” by Iran and Iran-backed militias.

“The purposes of this action were to protect United States personnel, to deter Iran from conducting or supporting further attacks against United States forces and interests, to degrade Iran’s and Quds Force-backed militias’s ability to conduct attacks, and to end Iran’s strategic escalation of attacks,” said the report, which was transmitted on Friday to the House Foreign Affairs Committee.

The document confirmed what lawmakers had privately suspected as the Trump administration has offered a shifting set of justifications for the strike against General Suleimani in Baghdad — taken with no congressional consultation — which brought the United States and Iran to the brink of war.

“This official report directly contradicts the president’s false assertion that he attacked Iran to prevent an imminent attack against United States personnel and embassies,” Representative Eliot L. Engel of New York, the chairman of the Foreign Affairs Committee, said in a statement. “The administration’s explanation in this report makes no mention of any imminent threat and shows that the justification the president offered to the American people was false, plain and simple.”

In the days after the strike that killed General Suleimani, administration officials gave a variety of rationales for the action as they confronted questions about why the president undertook such a provocative move that could incite an escalation with a dangerous rival. Mr. Trump and other top officials, including Secretary of State Mike Pompeo, said the strike was conducted in response to imminent threats to American lives, but they declined to provide any evidence, leaving lawmakers in both parties irate.

Pressed over several days, Mr. Pompeo conceded that the United States did not have specific intelligence on where or when an attack would take place. Mr. Trump claimed that four American embassies had been targeted for attacks, but under questioning during a television interview, Mark T. Esper, the secretary of defense, said he had seen no evidence of that.

Mr. Trump later insisted on Twitter that General Suleimani had, in fact, been planning an imminent attack on United States forces, but added, “it doesn’t really matter because of his horrible past!”

Representative Michael McCaul of Texas, the top Republican on the Foreign Affairs Committee, said in a statement that “U.S. intelligence indicated Soleimani was plotting more attacks on Americans and he was an authorized target in Iraq because of the ongoing threat he posed to Americans there.”

“The administration would have been ‘culpably negligent’ if they hadn’t acted,” Mr. McCaul said, quoting Gen. Mark A. Milley, the chairman of the Joint Chiefs of Staff. “It is unfortunate that Democrats continue to criticize the president for a successful U.S. military strike of this brutal terrorist with American blood on his hands.”

The report on Friday came a day after the Senate passed a resolution aimed at restraining Mr. Trump’s war-making powers with Iran. The rare bipartisan vote illustrated the depth of the skepticism in both parties about the president’s strategy, and lawmakers’ frustration with the administration’s refusal to consult Congress on military matters. The House is expected to pass the measure soon, sending it to the president’s desk. Mr. Trump’s advisers have said he will veto it.

The White House infuriated lawmakers in early January when it sent Congress a formal notification of the drone strikes required under the War Powers Act. Lawmakers had expected it to lay out a legal justification for the strike, but the entire document was classified, and officials who read it said it contained no information on future threats or an imminent attack.

Lawmakers were further angered by a series of briefings delivered by top administration officials that they described as insulting and demeaning, complaining that they were dismissed for questioning the administration’s strategy.

Friday’s report also only discussed previous acts of aggression by Iran. It cited as a legal framework the president’s constitutional powers as commander in chief and the authorization for the use of military force in Iraq that Congress passed in 2002, using two justifications the administration has previously mentioned.

“Iran’s past and recent activities, coupled with intelligence at the time of the airstrike, indicated that Iran’s Quds force posed a threat to the United States in Iraq,” the report said.

Congressional Democrats have coalesced behind a new push to repeal the 2002 law, which was passed to authorize a military response to Saddam Hussein and his government. They said Mr. Trump’s broad reading of it illustrated how the statute has been stretched and distorted to accommodate missions that Congress never envisioned when it was debated.

“To suggest that 18 years later this authorization could justify killing an Iranian official stretches the law far beyond anything Congress ever intended,” Mr. Engel said.

The House last month voted to repeal the 2002 law, with lawmakers in both parties arguing that the authorization had become outdated and been abused by presidents as a blank check to circumvent Congress in taking military action. During negotiations on the annual defense policy bill, the White House, focused on creating the Space Force as the sixth branch of military and maintaining the ability to divert military construction funds to pay for the border wall, was initially open to repealing the 2002 law, but the Pentagon intervened.