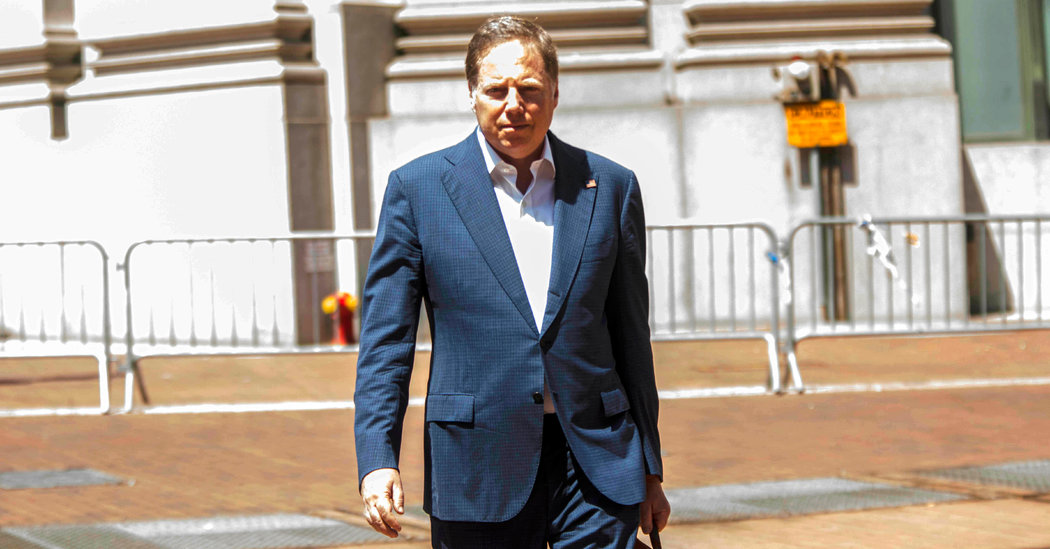 WASHINGTON — The declaration by the top federal prosecutor in Manhattan that he would stay in his job despite Attorney General William P. Barr’s attempt to fire him raised not just the mystery of what was behind Mr. Barr’s move, but also a legal question: Who has the authority to remove him?

No definitive and settled Supreme Court precedent exists to look to for guidance, and federal statutes appear to conflict on the question. That sets up the possibility of a protracted fight in court if the Trump administration pushes forward and Geoffrey S. Berman, the United States attorney for the Southern District of New York, continues to resist.

But legal experts pointed to a 1979 Justice Department opinion to suggest that the ultimate result of any courtroom confrontation will likely be that President Trump — though not Mr. Barr — has the authority to fire Mr. Berman.

“It’s probably the case that Trump, but not Barr, would have to remove Berman and take the political responsibility for doing so,” said Martin S. Lederman, a Georgetown University law professor who served in the Justice Department’s Office of Legal Counsel in the Obama administration.

Normally, under the Constitution, the power to remove government officials rests with whomever appointed them, except in instances where Congress set up an alternative mechanism. At issue is how that framework applies to the position of a U.S. attorney who was appointed by a court, as Mr. Berman was in 2018.

While the president appoints most U.S. attorneys following Senate confirmation, a law permits an attorney general to appoint a prosecutor to fill those vacancies for 120 days. If that temporary appointment expires, judges can fill it. A prosecutor appointed by the court will “serve until the vacancy is filled,” the statute says.

That is how Mr. Berman became U.S. attorney. He was initially appointed by former Attorney General Jeff Sessions, and federal judges in Manhattan reappointed him after the 120-day period expired. In his statement on Friday night, Mr. Berman indicated that Mr. Barr could not fire him because he had been appointed by the court, and declared he intended to remain in office until the Senate confirms a successor.

“I have not resigned, and have no intention of resigning, my position, to which I was appointed by the judges of the United States District Court for the Southern District of New York,” he said. “I will step down when a presidentially appointed nominee is confirmed by the Senate.”

However, another federal law says that U.S. attorneys may be removed by the president. On its face, it makes no exception for those appointed by courts. That raises the question of whether Congress has established that presidents may remove prosecutors appointed by courts.

In 1979, during the Carter administration, the Justice Department’s Office of Legal Counsel, which analyzes legal issues for the executive branch, looked at this question. It concluded that the president — but not the attorney general — could fire such an official.

In a memorandum opinion, John M. Harmon, the head of the office at the time, cited the law that says presidents may fire U.S. attorneys. The law’s broad wording makes sense, he wrote, only if it is applied not just to presidentially appointed U.S. attorneys “but also is to be read as extending to ‘each’ U.S. attorney, including the court-appointed ones whom the president could not remove without congressional leave.”

Mr. Harmon also pointed to constitutional arguments to back his conclusion: U.S. attorneys exercise executive power, making the president responsible for the conduct of their offices, so the president “must have the power to remove one he believes is an unsuitable incumbent, regardless of who appointed him,” he wrote.

District court judges in Manhattan may be inclined to disagree and back an alternative interpretation that keeps in their hands the power to remove a U.S. attorney they appointed. But if potential litigation over the issue were to go all the way to the Supreme Court, a majority of the justices are Republican appointees steeped in a conservative ideology of White House power that includes a robust view of the president’s ability to remove officials.

In addition, Mr. Harmon wrote in 1979, it might violate constitutional protections for due process of law if judges overseeing cases as neutral arbiters had the power to fire prosecutors if the judges did not like how they handle their responsibilities.

Office of Legal Counsel opinions are generally considered to be binding interpretations of the law for Justice Department officials, but they are not legal precedents in the sense of judicial opinions by appeals courts or the Supreme Court. The 1979 opinion pointed to one district court opinion from 1963 — also in Manhattan — which expressed the view that a president may remove a court-appointed prosecutor.

Even if that is the case, Mr. Barr overstepped by trying to oust Mr. Berman on his own. Kelly T. Currie, a former acting U.S. attorney in Brooklyn, said Mr. Berman had “called the attorney general’s bluff” because only the president, not Mr. Barr, had the power to remove him.

“It’s hard not to suspect that Barr’s move is anything but an effort to thwart investigations that could be damaging to the president or his associates,” he added.

Even if Mr. Trump backs up Mr. Barr by ousting Mr. Berman and courts agree that the president can do so, one other question would remain: Who gets to appoint a temporary successor to fill the vacancy while the Senate considers Mr. Trump’s nominee — Mr. Barr, as he purported to do on Friday night by designating the U.S. attorney for New Jersey to also hold that role in Manhattan, or the court?

That could be particularly important because there is reason to believe that the Senate will not confirm Mr. Trump’s nominee for the position, Jay Clayton, the chairman of the Securities and Exchange Commission. Senator Lindsey Graham, Republican of South Carolina and the chairman of the Judiciary Committee, said on Saturday that he will not move the nomination without the assent of New York’s two Democratic senators.

While it would be an abuse of power for Mr. Trump to fire Mr. Berman if his motive was that Mr. Berman was investigating his associates, the president’s motive is not the kind of questions the courts are likely to address, Mr. Lederman said.

Complicating matters, he added, is that it is far less clear that the Trump administration could unilaterally install any temporary successor to lead the office.

In 1986, when Samuel A. Alito Jr., now a Supreme Court justice, worked at the Office of Legal Counsel, he wrote a memorandum suggesting the attorney general cannot make successive interim appointments. Still, in 1987, Charles J. Cooper, then the head of the office, wrote in another memo that “it could be argued” that after a president removes a court-appointed U.S. attorney, the power to appoint an interim successor reverts to the attorney general.

“It’s not at all clear that either Trump or Barr — as opposed to the court — could name Berman’s temporary replacement,” Mr. Lederman said.

In any case, the Trump administration is heading into legally and politically murky waters. Back in 1979, Mr. Harmon acknowledged some ambiguity even about who could fire a court-appointed U.S. attorney in the first place. He left open the possibility that district court judges might interpret the conflicting statutes in a way that was more favorable to their own powers rather than the president’s.

Mr. Harmon warned that just because he thought Mr. Carter could remove a court-appointed U.S. attorney did not necessarily mean it would be a good idea “since the incumbent U.S. attorney apparently has the backing of the district court. That court might react unfavorably to any action that does not carefully comport with the letter of the statute.”