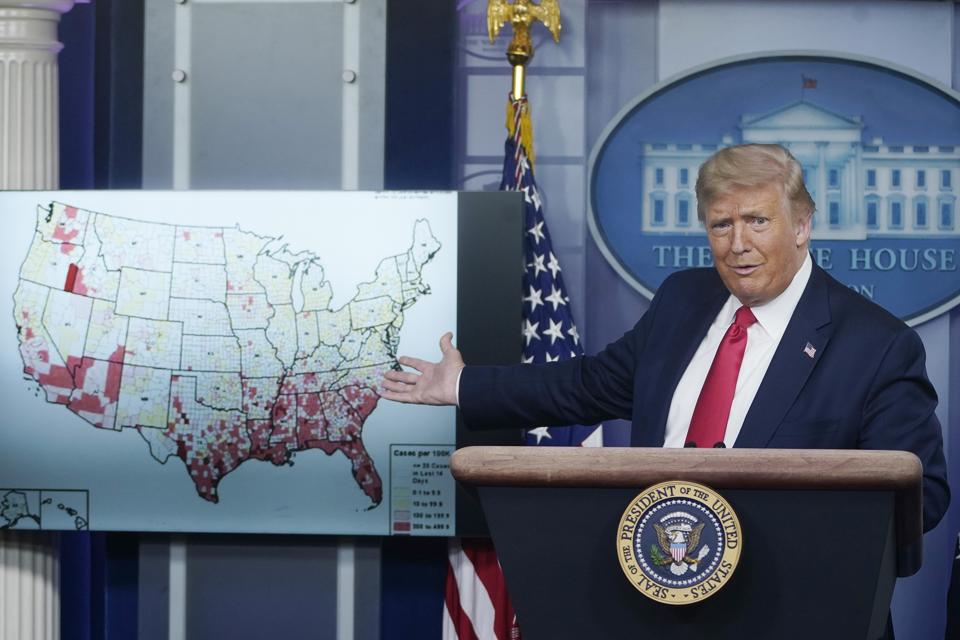 As we reported earlier in the week, FEMA has begun to approve states for the enhanced federal unemployment insurance benefit authorized by President Trump on August 8th. While some states have been approved, some are still in the process while others have turned down the assistance. And at least one state has already started sending out $300 weekly benefits to its citizens.

To stay up to date on this developing story, we’ve gathered information here on a state-by-state basis. It includes whether the state had or will seek FEMA approval for the $300 benefit, the status of the application, whether the state intends to pay the matching $100 benefit, and when claimants can expect to begin receiving the payments.

The timing of payments is still largely unknown. While one state has begun making payments, others are still making adjustments to their computer systems. As Forbes has previously reported, the average time to start sending out benefits once approved by FEMA is three weeks.

Colorado: FEMA Approved Colorado’s application on August 16, 2020. In response to written questions submitted to the Colorado Department of Labor and Employment, we received a written response on August 17, 2020 that a decision had not been made as to whether the weekly benefit would be $300 or include a state matching benefit of $100. In terms of timing, the written statement said that they “are still estimating development timeliness as systems require reprogramming. We have no timeline on . . . payments at this time.”

Iowa: FEMA approved Iowa’s application on August 15, 2020. To date, Iowa has not released information on when the $300 payments will begin. On the Iowa Workforce Development website a notice states that “FEMA and USDOL continue to issue guidance, and IWD will continue developing the implementation processes required for this program, including any necessary steps for claimants to apply. We will update our website as additional information becomes available, including timelines for application and payment. Please do not contact customer service regarding whether you are eligible for this benefit or when it may be paid.”

Louisiana: FEMA approved Louisiana’s application on August 15, 2020. Governor John Edwards had previously announced that the state would participate in the $300 federal benefit. In response to written questions submitted to the the Louisiana Workforce Commission, we received the following written statement on August 17th:

“The Louisiana Workforce Commission is working closely with our federal partners at the Federal Emergency Management Agency and United States Department of Labor. We submitted our ‘Other Needs Assistance-Supplemental Payments for Lost Wages’ application on August 14, 2020, which has been approved. As of now, details are pending and we do not have a date as to when claimants can expect payment. We are expecting more clarity and information to become available in the coming days.”

Missouri: FEMA approved Missouri’s application on August 16, 2020. To date it is unclear whether the benefit will $300 or $400 or when it will begin. An announcement on the Missouri Department of Labor website states that “[w]hile awaiting additional guidance from FEMA and the U.S. Department of Labor (USDOL), Missouri will continue as expeditiously as possible to implement the LWA program for eligible unemployed Missourians to be able to receive the additional benefits as soon as possible. We will update our website as more information becomes available, including any additional eligibility requirements and timelines for payment.”

The Missouri Department of Labor has not responded to a request for comment.

New Mexico: FEMA approved New Mexico’s application on August 15, 2020. According to a message on the New Mexico Department of Workforce Solutions, “President Trump signed a Presidential Memorandum on August 8 to offer “lost wages assistance” to enhance unemployment insurance benefits. There is no need for claimants to contact the Department of Workforce Solutions at this time. We will announce more information once it becomes available.”

Attempts to reach the Department of Workforce Solutions for comment have not been successful.

Utah: FEMA approved Utah’s application on August 16, 2020. In response to written questions, the Utah Department of Workforce Solutions confirmed in writing that the additional benefit would be $300 and that they “are projecting the payments will go out to those eligible in approximately three weeks.”

Alaska: On August 13, 2020, a press release stated that Governor Mike Dunleavy had authorized the Alaska Department of Labor and Workforce Development to begin the FEMA application process. The statement said the process would result in a $300 weekly increase in unemployment benefits.

Idaho: Governor Brad Little announced that Idaho would apply to FEMA for the federal $300 assistance. The announcement didn’t indicate whether Idaho would fund the extra $100 per week.

North Carolina: Gov. Roy Cooper said this week that he has begun the process of applying for unemployment benefits with FEMA. Based on this report, North Carolina plans to fund the $100 state match, bringing total benefits to $400 a week. The state funding, however, has not been approved by the legislature.

Ohio: It’s been widely reported that Governor Mike DeWine has said Ohio will be moving forward to apply for the $300 benefit.

Oklahoma: On August 17, 2020, Governor Kevin Stitt announced that Oklahoma had submitted its grant application for LWA to FEMA. The announcement noted that the process would allow the state to send out $300 weekly benefits.

West Virginia: On August 10, 2020, Governor Jim Justice said that West Virginia would pay the $100 state match, giving eligible claimants a $400 weekly benefit: “Hands down, period, West Virginia is going to pay it,” Gov. Justice said. “We do so very willingly.”

Based on our analysis of publicly available information, the following states have are either still evaluating their options or have turned down the federal unemployment assistance. In some cases, we have inferred their rejection of the aid based on comments by state officials.

Mississippi: It’s been reported that Gov. Tate Reeves had turned down the assistance. However, in response to a written question, we received the following written comment from Renae Eze, a spokesperson for the Governor’s office:

“We have not turned down the federal unemployment assistance at this time. In consultation with the Mississippi Department of Employment Security, Governor Reeves and his team continue to review all options to provide assistance through our state’s unemployment trust fund and ensure the well-being of all Mississippians out of work due to this pandemic. We appreciate President Trump stepping up and trying to help American workers during this difficult time.”

Pennsylvania: In a letter dated August 13, 2020, Governor Tom Wolf was critical of Mr. Trump’s executive action authorizing the enhanced unemployment benefits. While his statement didn’t explicitly rejected the aid, it suggested Pennsylvania would not be submitting an application to FEMA.

Governor Wolf’s office did not respond to a request for comment.

Oregon: David Gerstenfeld, interim head of the Oregon Employment Department, said that uncertainties make it difficult to know what implementing the federal benefit would require: “There are still a huge number of uncertainties about the program that was discussed in that executive order.” He added that they “don’t know exactly what it would take to implement because we don’t know what we would be implementing.”

South Dakota: Governor Kristi Noem of South Dakota declined unemployment assistance because the state doesn’t need it: “My administration is very grateful for the additional flexibility that this effort would have provided, but South Dakota is in the fortunate position of not needing to accept it. South Dakota’s economy, having never been shut down, has recovered nearly 80% of our job losses.”

We will update this developing story as information on additional states becomes available.