Nearly two-thirds of the coronavirus tests conducted in California are still awaiting results – in part due to an initial bottleneck at a single laboratory – leaving medical providers and patients in the dark, and health officials without the information they need to understand the disease’s spread.

Of approximately 94,800 tests conducted in California, about 59,500 results were still pending as of Thursday, even as the state’s governor, Gavin Newsom, promised to “substantially increase” testing this week.

The nation’s most populous state has been among the worst hit by the virus, but testing efforts have been hampered not only by the processing backlog but by a shortage of testing kits themselves. California ranks 39th out of 50 states and the District of Columbia in per capita testing, according to data collected by the Covid Tracking Project.

California megachurch linked to spread of more than 70 coronavirus cases

The major reason for the backlog has been a massive bottleneck at Quest Diagnostics, a large commercial lab that launched coronavirus testing at a facility in San Juan Capistrano, near Los Angeles. On Thursday the company reported a backlog of 115,000 tests, though it declined to say how many of the samples awaiting processing were from California.

When coronavirus first began spreading through the country, large commercial labs like Quest and Labcorp were the only ones with the infrastructure to quickly gain federal approval for their tests, and soon hospitals in California were being encouraged by these companies and by the government to send their samples to San Juan Capistrano for processing.

Meanwhile, academic medical centers were scrambling to get approval to do their tests in-house, said Attul Butte, who leads the Institute for Computational Health Sciences at the University of California, San Francisco. “Now, our own internal tests are faster,” Butte said. “But it took us a while to get those up and running.”

In the meantime Quest was flooded, and quickly overwhelmed. Initially, the commercial lab gained approval for a bespoke test that needed to be manually processed by lab technicians, which the company said in a statement to the Guardian is “less suited” to a situation where tens of thousands of tests need to be processed each day. Quest said it has now started processing tests at 12 laboratories across the country, some of which are now using to an automated system developed by the Swiss diagnostic company Roche. 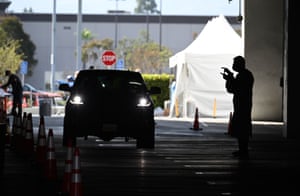 “But once you get behind, it’s very hard to catch up,” said Jennifer Doudna, a researcher at the University of California, Berkeley, who has transformed her 2,500-sq-ft scientific laboratory into a pop-up lab Covid-19 testing center. Doudna and her team are using robotics to process at least 1,000 samples a day, collected at the university’s student health center and other nearby hospitals and clinics, to deliver test results within 24 hours.

“We hope that having pop-up labs like ours will really help bring down the backlog,” she said. “So we can help people quickly understand when they may have an infection.”

Having more academic labs and state and county health labs process tests also allows health centers to send their samples somewhere local, rather than mailing them across the state – or even farther for processing.

At the Contra Costa county medical center, the physician Madhvi Shah said she’s relieved that the wait time for test results has somewhat reduced in the past week. “Initially, they were taking almost 10 days or up to two weeks,” she said. “People would be getting their negatives or positives way after they’d waited out their quarantine period.”

Unlike some other hospitals and health centers in California, the Contra Costa health service has access to a number of rapid-result tests, which the county’s lab can process within 24 hours. The tests are reserved for patients in high-risk groups including those who are on dialysis, or are undergoing chemotherapy, as well as for healthcare workers who need to know quickly if they may have passed an infection on to patients.

Over the past week, the standard tests that Contra Costa sends for processing at Quest are being processed within five to seven days, Shah said. “It’s not necessarily the worst thing,” she said. But especially with so many patients sheltering at home, often with family members to whom they worry they’ll pass the disease, “I do wish we could give them results faster.”

It’s not only patients that are anxious to know the results of coronavirus tests – epidemiologists and infectious disease experts have warned that while California’s early and restrictive shelter-in-place mandates appear to have slowed a surge of illness that could overwhelm hospitals, delays and backlogs in testing have limited their ability to track the virus’ spread.

“As this pandemic goes through its course,” said Butte at Stanford, “We’re going to need more numbers.”