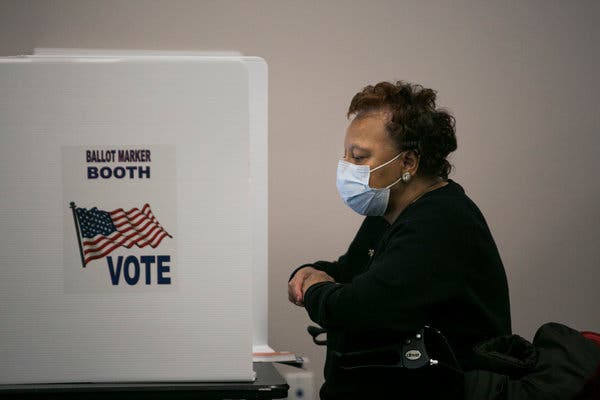 Turnout is a question ahead of every election. It would be an understatement to say it is a more challenging question than usual ahead of Tuesday’s primaries, as voters head to the polls in Florida, Illinois and Arizona amid the coronavirus pandemic.

Although it’s hard to forecast the impact of coronavirus on turnout, there are a few hard facts that, on balance, suggest it might have less of an effect than one might expect in Florida and Arizona. But Illinois might be somewhat more vulnerable to a decline in turnout. (On Monday, Ohio’s governor postponed the state’s primary over health concerns.)

One factor is sure to blunt the effect of the coronavirus: early voting. Already, millions of voters in these states have cast their ballots either in person or by mail. Early voters are almost always older than the overall electorate, which tends to mitigate the possibility that such voters, who are most vulnerable to the coronavirus, won’t match their typical share of the vote.

In 2016, 81 percent of Democrats in Arizona cast their ballots ahead of the election. So far this year, the state has already received more Democratic ballots than it did four years ago. Alone, that’s enough to significantly insulate the state from the effects of the coronavirus.

Florida also has extensive in-person and early voting. Nearly one million Democrats have already voted there, or about 55 percent of the total turnout from the 2016 Democratic primary. Early voters tend to be older in Florida as well. In 2016, of those between 18 and 24 who voted, 62 percent voted on Election Day. That’s compared with just 39 percent of voters over age 65 who did so, according to an analysis by Matthew Isbell, a Democratic political consultant in Florida.

Another factor that might shape turnout is the number of known coronavirus cases. This could affect whether voters perceive a substantial risk in voting. None of these states have a particularly high rate of confirmed coronavirus cases, according to data compiled by The New York Times.

All of these figures are better than those in France, where voters went to the polls in local elections on Sunday. There, turnout was down by 20 percent from the last election in 2014. It was a significant decline in turnout, but perhaps not one that bodes especially poorly for the elections in the U.S. on Tuesday. After all, there are more than 83 cases per million French resident, or more than 10 times the rate of Illinois, and there is no substantial early voting.

There is no reason to assume that American and French voters will respond to the coronavirus threat in the same way. But if they did, the turnout in today’s primaries would presumably remain relatively strong.

If turnout did drop because of coronavirus, it’s hard to say which candidate would benefit. Older voters would seem likeliest to stay home. They face the greatest health risks from coronavirus, and older Democrats tend to be most concerned about it, according to data from Civiqs. A lower turnout among older voters would tend to hurt Joe Biden, who has won older voters by a wide margin.

On the other hand, older voters are likeliest to have already voted, and they are the most reliable voters in general.

Confirmed cases tend to be concentrated in metropolitan areas, where Bernie Sanders has usually fared best in the contests since South Carolina. In Illinois, for instance, most cases are in Cook County, which includes Chicago and around half of Illinois Democrats. Cook County has 70 known coronavirus cases, or 13.4 per million residents. One could argue that turnout is likeliest to drop there, and that might be bad news for Mr. Sanders, who seems likely to get swept in the state’s rural areas and suburbs.

Ultimately, even a significant coronavirus turnout effect would be unlikely to change the trajectory of the race. Mr. Biden leads by a wide margin in all three states, based on the polls and recent election results. If he wins by anything like the kind of margins suggested by the polls, he could end the night with an all but insurmountable lead in the pledged delegate count.