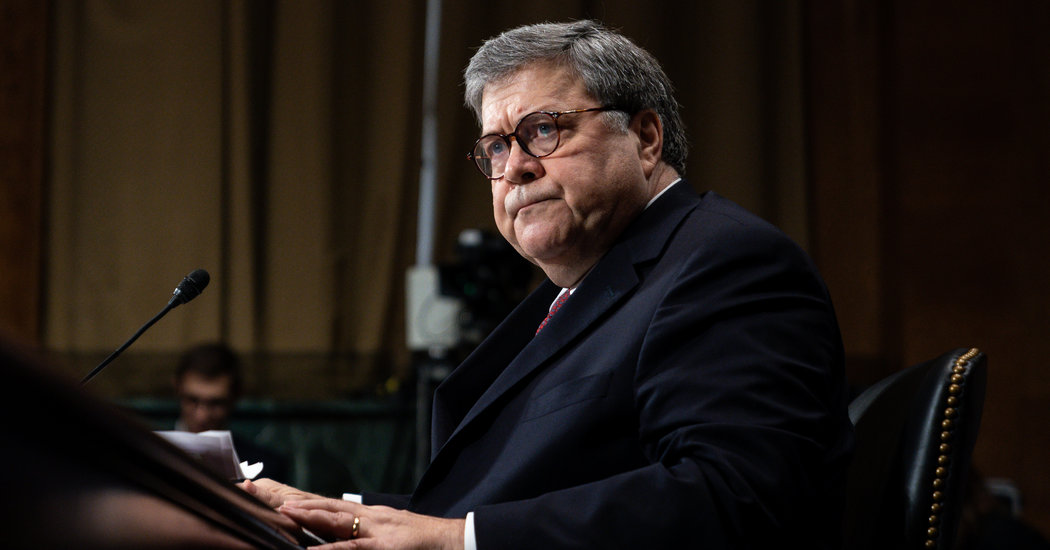 Attorney General William P. Barr delivered a sharp reproach on Thursday to President Trump, defending the role of the Justice Department in the face of the president’s persistent attacks.

In an interview with ABC News, Mr. Barr addressed the fallout this week over a case involving a longtime friend of Mr. Trump’s, Roger J. Stone Jr., who was convicted last year of obstructing a congressional inquiry. His comments amounted to a rare rebuttal by a cabinet official who has almost unflinchingly stood by the president through politically sensitive investigations and the impeachment inquiry.

Mr. Barr said Mr. Trump’s disparaging remarks over sentencing recommendations for Mr. Stone undermined the Justice Department and made it “impossible for me to do my job.” Senior department officials, including Mr. Barr, intervened this week to recommend a more lenient sentence, and Mr. Trump spent days afterward criticizing the department and the prosecutors and the judge overseeing Mr. Stone’s case.

Here are some of the key quotes from Mr. Barr’s interview:

On the president’s tweets regarding Stone’s sentencing

On the independence of the Justice Department

“As I, you know, said during my confirmation, I came in to serve as attorney general. I am responsible for everything that happens in the department, but the thing I have most responsibility for are the issues that are brought to me for decision. And I will make those decisions based on what I think is the right thing to do and I’m not going to be bullied or influenced by anybody. And I said at the time, whether it’s Congress, newspaper editorial boards or the president. I’m going to do what I think is right. And, you know, I think I cannot do my job here at the department with a constant background commentary that undercuts me.”

On whether Trump personally weighed in on the sentencing guidelines

“Nope. I have not discussed the Roger Stone case at the White House.”

On the president’s authority to request investigations

“In many areas that don’t affect his personal interests — terrorism, or fraud by a bank or something like that where he’s concerned about something, he can certainly say, ‘I think someone should look into that.’ That’s perfectly appropriate. If he were to say, go investigate somebody, and you sense it’s because they’re a political opponent, then an attorney general shouldn’t carry that out, wouldn’t carry that out.”

On public perception of Barr’s relationship with the White House

“I do think that in the current situation, as I’ve said, the fact that the tweets are out there and correspond to things we’re doing at the department sort of give grist to the mill and that’s why I think it’s time to stop the tweeting about Department of Justice criminal cases.”