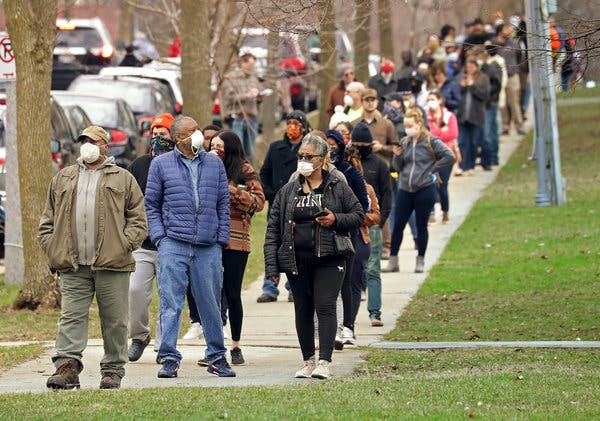 People lined up to vote outside Riverside High School in Milwaukee on Tuesday.Credit…Mike De Sisti/Milwaukee Journal Sentinel, via Reuters

Across Wisconsin, would-be voters complained that the absentee ballots they requested had never arrived in the mail, even though figures released by the state seemed to indicate the problem was not widespread.

Representative Gordon Hintz, the Democratic minority leader in the State Assembly, said there may have been a glitch in the system, perhaps because of overwhelmed elections offices. “It appears that people who requested their ballots between March the 20th and 24th, or maybe the 25th, have not received their ballots,” Mr. Hintz said.

But Mr. Hintz estimated that hundreds, if not thousands, of voters in his Oshkosh district alone had not received the ballots they asked for, leaving them in a predicament over whether to vote in person and risk contracting or spreading the coronavirus.

One of them was Mr. Hintz himself, who had decided not to vote Tuesday because the ballot he requested on March 22 had not arrived. The Wisconsin Elections Commission’s website says it was mailed to him on March 24.

Roger Luhn, a psychiatrist in Milwaukee, said Tuesday that he was also among the voters who had not received an absentee ballot.

“According to the website, they mailed the ballot to me on March 23,” said Dr. Luhn, who is medical director of a psychiatric hospital. “Yesterday, I gave up. I called the election commission. They put you on extended hold.”

Dr. Luhn said he would not go to the polls on Tuesday out of concern for his family, his patients and his fellow staff members. “There is no good outcome for today’s election,” he said. “No matter what happens, not enough people will have had an opportunity to safely cast their ballots.” 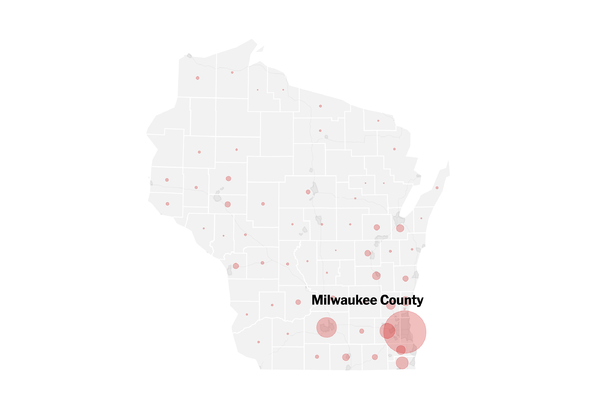 A detailed county map shows the extent of the coronavirus outbreak, with tables of the number of cases by county.

The effects of shuttering so many polling sites in Milwaukee were immediately apparent on Tuesday morning: Across the city, lines stretched for blocks even before 7 a.m. local time.

On the South Side of the city, the parking lot of Alexander Hamilton High School was already full as daylight broke. By 8 a.m., more than 300 voters waited in a line that snaked through the parking lot and down the street.

At other locations nearby that would have normally been open for voting, signs were posted directing voters to Hamilton High School. But many of the locations were in heavily immigrant neighborhoods, predominantly Spanish or Hmong, and the only signs posted were in English.

At Marshall High School, in the northern part of Milwaukee, the line stretched for more than three blocks, with voters keeping six feet of space between each other. Most wore masks or other facial coverings.

The northern part of the city, which is predominantly black, has been hit the hardest by the coronavirus. Yet hundreds of voters had already queued by early morning.

The lines weren’t limited to Milwaukee. In Waukesha, a suburb just outside of Milwaukee, only one polling location was open for a city of 70,000. A similarly long line wrapped around a parking lot, as cones denoting a safe distance between voters helped break up the line.

Beyond reduced polling sites and undelivered absentee ballots, another hurdle to voting.

Countless Wisconsinites were unable to vote Tuesday because local public health officials reduced polling sites or because municipal clerks were swamped by a record number of absentee ballot requests.

Still others found themselves disenfranchised by the state’s absentee voting laws, which require a witness signature before a ballot can be returned.

Jill Swenson, a 61-year-old literary agent, is self-quarantining in her Appleton home. A widow, she lives alone, suffers from a chronic lung disease and fears contracting the coronavirus.

“I received my ballot and was much surprised, since I had never voted absentee before, to discover there was a witness requirement,” Ms. Swenson said in a phone interview Tuesday.

“I don’t know anyone who has been self-isolating who could be a witness for me.”

Her neighbors, Ms. Swenson said, include an Appleton police officer, a factory worker and teenage boys who have been playing basketball in their driveway — no one with whom she felt comfortable sharing space and air.

She contacted the Wisconsin Elections Commission, the bipartisan state elections agency run by a former Republican state lawmaker, and was sent advice on how to find a witness.

The commission proposed Ms. Swenson have a witness come to her window, or watch her mark her ballot via FaceTime or Skype. Ms. Swenson would then have to sign her ballot, leave it outside her house, and have the witness sign and return it.

Then on April 2, U.S. District Judge William Conley waived the absentee witness requirement. Ms. Swenson put her ballot in the mail the next day.

When she logged on to the state elections website to check the status of her ballot Tuesday, it said her completed ballot was not received.

Partisan brawling and a logistical tangle have led to chaos.

Like so much else in Wisconsin over the last decade, the state’s coronavirus response and opinions about moving the election broke along partisan lines.

Democrats, aiming to expand turnout especially in the state’s largest cities, Milwaukee and Madison, sought to expand mail voting and delay the election until June. Republicans, wary of affording new powers to a Democratic governor and content with suppressing turnout in urban centers where the coronavirus has struck hardest, refused to entertain proposals for relief.

“Thousands will wake up and have to choose between exercising their right to vote and staying healthy and safe,” Gov. Tony Evers said Monday after the state’s Supreme Court blocked his effort to postpone the election.

But Dean Knudson, a Republican former state legislator who is chairman of the Wisconsin Elections Commission, said late Monday that voters who wished to participate in Tuesday’s contest would have no recourse but to venture to the polls — even if they had requested but had not yet received an absentee ballot.

“If they haven’t got their ballot in the mail,” he said, “they are going to have to go to the polling place tomorrow.”

Other Republicans have played down the danger to public health of voting during a pandemic. One Republican county chair, Jim Miller of Sawyer County, said the process would be similar to people picking up food to eat during the state’s stay-at-home order.

“If you can go out and get fast food, you can go vote curbside,” Mr. Miller said. “It’s the same procedure.”

Why are Wisconsin Republicans so adamant about holding Tuesday’s elections?

It’s not just a presidential primary on the ballot in Wisconsin. Also at stake is the makeup of the Wisconsin Supreme Court — the very court that struck down Mr. Evers’s effort to delay Tuesday’s elections.

Statewide races in Wisconsin tend to be close, and Supreme Court elections, which come with 10-year terms, are often even closer.

Last year Brian Hagedorn, a conservative judge, defeated a liberal challenger by less than 6,000 votes out of 1.2 million cast. In 2011, another conservative, David T. Prosser Jr., won by 7,000 votes after officials in Waukesha County found 14,000 overlooked ballots the day after the election.

For now, conservatives hold five of seven seats on the officially nonpartisan court. The incumbent in Tuesday’s contest, Justice Daniel Kelly, was appointed to replace Justice Prosser by Gov. Scott Walker in 2016 and is seeking his first full term. He faces Jill Karofsky, a circuit court judge.

If Justice Kelly wins, it will cement the conservative majority’s ability to block future Democratic efforts to change the state’s strict voting laws and litigate an expected stalemate over congressional and state legislative boundaries during post-2020 redistricting.

Liberals would need to flip just one of the conservatives’ votes if Judge Karofsky wins. Unless a justice retires or resigns, they would not have an opportunity to win a court majority until the 2023 elections.

A morning of voting brings disruption and confusion.

MILWAUKEE — After a morning of voting across Wisconsin, in an election that has drawn derision from public health experts and inflamed partisan tensions, a picture is emerging of long lines, some flaring tempers and a dose of chaos and confusion in the state’s most heavily populated areas.

Voters in Milwaukee, the state’s Democratic base and most populous city, have experienced significant disruptions at polling places. Election workers in the city expected more than 50,000 voters on Tuesday, but the number of polling locations was drastically reduced, from more than 180 to just five. Some voters waited in line for more than two hours, spread out over blocks as they tried to practice social distancing to guard against the coronavirus.

In other parts of the state, especially in smaller communities that tend to be less Democratic, the in-person voting process was running relatively smoothly, with wait times more closely resembling a normal election.

Democratic officials in Wisconsin have lashed out at Republicans, saying they created an atmosphere that amounts to voter suppression with a key statewide Supreme Court race on the ballot. It remains to be seen how the disruptions could affect the Democratic presidential primary contest between Mr. Biden and Mr. Sanders.

Polls will close at 9 p.m. Eastern, but that’s unlikely to be the end of the elections.

Though voting may end on Tuesday night, there will most likely be a new round of lawsuits challenging both the results and the disenfranchisement of many voters. Many allied groups in Wisconsin were already gathering accounts of voters unable to get a ballot or vote in anticipation of litigation.

Adding to the uncertainty, the results themselves will most likely be delayed by almost a full week: The Wisconsin Elections Commission has directed local municipal and county clerks not to release results until next Monday afternoon, in compliance with a federal court ruling.

“Instead of having Iowa-style results where no one knows what to expect, if we stick to this we’re going to have a clean election tomorrow but we’re not going to report the results until the following week,” said Mr. Knudson, the elections commission chairman.

Reporting was contributed by Astead W. Herndon from Milwaukee, Nick Corasaniti and Stephanie Saul from New York, and Reid J. Epstein from Washington.