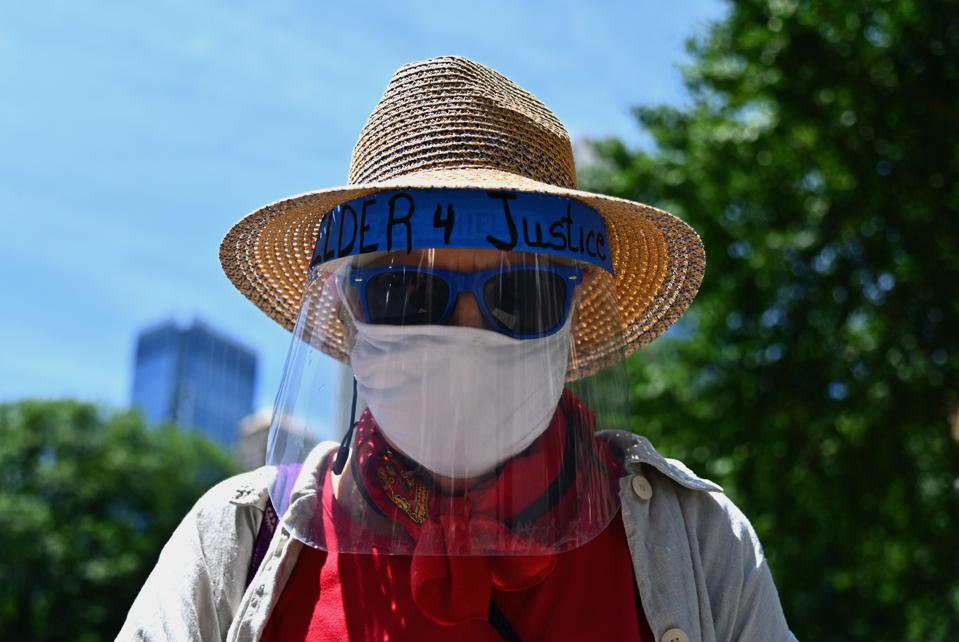 An elderly protestor wears face mask with a sign during a rally outside City Hall across from One … [+] Police Plaza to demand less funding for the New York Police Department (NYPD) on June 24, 2020 in New York City. (Photo by Angela Weiss / AFP) (Photo by ANGELA WEISS/AFP via Getty Images)

At a time of extremes in society, absolute alarmist statements might seem like quenching flames with jet fuel. But, in the case of Donald Trump’s proposed permanent cuts to payroll taxes, absolute and alarmist are baseline fact.

If Trump got his way with a permanent payroll tax cut and there was no replacement source of revenue, Social Security would be out of money by the middle of 2023. That’s not some click-bait concept. It’s the projection of the Office of the Chief Actuary at the Social Security Administration.

In answer to an August 19, 2020 letter from four Democratic senators, Chief Actuary Stephen Goss laid out a scenario that made two major assumptions: Congress would authorize a permanent end to the dedicated payroll taxes that fund Social Security and no other provision would be made to replace the income stream, such as transfers of funds from the Treasury.

Operations and benefits require a constant replenishing of funds. In calendar year 2019, Social Security took in $1,061.8 billion and spent (mostly in benefits payments) $1,059.3 billion, leaving a positive balance of $2.5 billion for the period.

A billion is a huge amount of money, unless you’re talking about retirement benefits for a country of about 330 million people. The money everyone pays is not put aside in personal retirement accounts. It’s the cash that makes the benefits to retired people possible, just as workers today will eventually depend on others in the future to pay for their retirement benefits, absent some massive restructuring of the system. This is why constant replenishment is necessary.

Cut payroll taxes starting January 1, 2021, and “DI Trust Fund asset reserves would become permanently depleted in about the middle of calendar year 2021, with no ability to pay DI [disability] benefits thereafter,” Goss wrote. The ability to pay OASI benefits—regular retirement benefits—would end by the middle of 2023.

Could the scenario happen? Certainly, if Trump were reelected and Republicans both kept control of the Senate and regained it in the House. Coordinated agreement among all three could even in theory cancel payroll taxes retroactively back to January 1, 2021 once newly elected officials take office.

Now, Trump has said that Social Security wouldn’t fail and that it is possible to fund it different ways, like out of general revenues. Such an approach would mean only shifting the spending from one pocket to another, requiring that the government revenue would have to make it up somehow. And that means taxpayers sending in that necessary money. Unless someone is thinking of running the world’s largest fund-raising bake sale

Trump hasn’t been able to deliver on his frequently promised “in two weeks” healthcare bill. And Senate Republicans have made it clear that they don’t wish to spend the amount likely necessary, given the tens of millions still out of work. There is no reason to think that circumstances would work out any better.

What is important here—beyond what would be an existential financial crisis for many millions of older Americans—is the lack of connection between politics and governance. Holders of political office have responsibilities to oversee the operations of government in the name of, and for the good of, the people. Politicize decisions and the results endanger important activities.

The effects hit those with few economic resources the most, with the elderly on the whole being among the least financially secure groups.