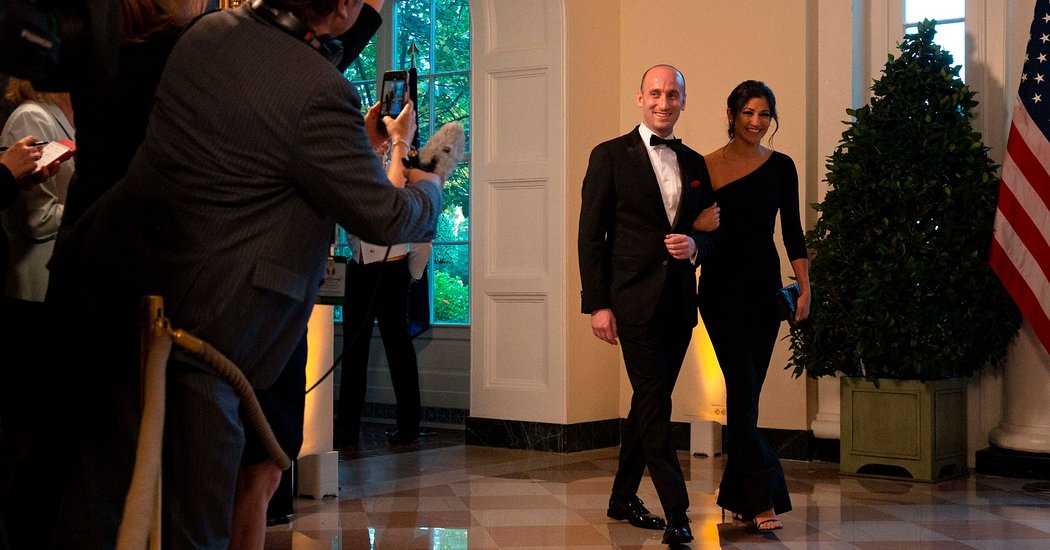 WASHINGTON — Stephen Miller and Katie Waldman, who met while he was developing the administration’s restrictive immigration policies and she was working as a spokeswoman for the Department of Homeland Security, were married at President Trump’s hotel on Sunday evening.

The wedding details, shared in increments by the bride to reporters over the past few months, illustrate what it meant for one notorious Trump aide to get married in a heavily Democratic town where the mere sight of him is known to create angry confrontations.

They hired security. Wedding invitations contained a card detailing the couple’s privacy requests. The registry was created under a fake name. Invited friends who might bring unruly partisans as their guests to the wedding were screened.

In the end, the nuptials were stocked with Trump administration officials, including Mr. Trump, Vice President Mike Pence and the people who love the couple. (The people who don’t love them created a hashtag that mocked the event for being held at the president’s hotel.) The couple celebrated with monogrammed ice cubes, mutual statements of love and a playlist selected by the groom.

“Spectacular and very special wedding tonight with new bride and groom Stephen and Katie Miller!” Reince Priebus, the former White House chief of staff, wrote on Twitter. “So much fun and still going with @RealDonaldTrump having fun and the band is going strong!”

But the scene reflected what has been an uncomfortable truth for young aides since the beginning of the administration: Washington’s highly politicized culture — a reality that the president and zealous officials like Mr. Miller have directly contributed to — can be brutal on dating life. This mirrors a larger trend taking place throughout the rest of America, according to experts: Singles, particularly members of the under-40 crowd, do not want to meet or match with people outside their political tribe.

For the young aides in this White House, one solution seems to be to meet and marry each other, or at least endeavor to find love inside the political bunker of the Trump administration.

The couples include Stephanie Grisham, the White House press secretary, and Max Miller, the director of the White House advance office, who stepped out to road test their relationship when they attended the state dinner for Australia together last fall. There is also Nick Luna, the president’s body man, and Cassidy Dumbauld, an assistant to Jared Kushner, Mr. Trump’s senior adviser.

There are weddings as well. John Pence, the vice president’s nephew and a Trump campaign official, and Giovanna Coia, a White House aide and the cousin of Kellyanne Conway, the counselor to the president, were married in Atlantic City last year.

The Miller wedding was not even the first time a White House couple has decided to pump money back into the president’s private business: Last November, Zach Bauer and Meghan Patenaude, two longtime administration officials, married in a black-tie ceremony at the Trump International Hotel. Zach Everson, a journalist who documents the goings-on at the hotel, used menu and venue fees to estimate that the reception cost at least $35,000, with hotel guests paying about $375 to stay the night.

Previous administrations, given the close quarters and long hours of White House life, also spawned couples. The youngsters of the Obama administration were hailed as “microcelebrities” who were known for dating each other — in fact, the Obama White House at times courted a “frat house” reputation based on the testosterone-fueled behavior of several of Mr. Obama’s aides. But outside the complex gates, the youthful staff members also had wider access to the city’s dating pool and social scene.

Aides in this White House have isolated themselves along with Mr. Trump. They tend to retreat into their own homes for socializing or to the safety of the president’s properties. Technology has also made it harder for the willing to date outside their political tribe, even if they wanted to: App-based dating platforms, including OkCupid and Bumble, have started allowing users to filter out one another based on personal politics.

According to data released by OkCupid — whose recent ad campaign includes slogans like “It’s OK to choose Mr. Right based on how far he leans left” — anti-Trump mentions on user profiles have increased by more than 52 percent since 2017. More pointed projects include a Never Trump dating site, which invites users to “escape Trumpism with an enlightened lover.”

“In many parts of America, your parents would have said to you, ‘Don’t talk politics until you’re way down the pike in your relationship,’” said Melissa Hobley, the chief marketing officer for OkCupid. “What’s changed is we see millennials and Gen Z don’t even want to match with you — let alone talk, go on a date, sleep with you, get in a relationship, get married — they don’t want to match without knowing how you feel about certain issues.”

There has been a rise in Republican-only dating websites and apps, including an app called DonaldDaters and a site called Republican Singles, which lists as part of its key tenets an adherence to “traditional marriage between one man and one woman, as God defined in the Holy Bible.”

Julie Spira, a dating coach and author of “Love in the Age of Trump: How Politics Is Polarizing Relationships,” said politics has become the “No. 1 deal breaker” for singles, with many holding Mr. Trump responsible for cleaving a wider cultural divide. The president and his supporters counter by blaming the news media.

“I think potentially you could be cutting the dating pool in half if you only want to date someone who voted the same way you do,” Ms. Spira said. “But if you have very strong feelings about the wall or about health care or about women’s rights, and you have very strong feelings about things that are changing in our country, and you want to watch the news cycle with your potential love interest, it’s something that happens.”