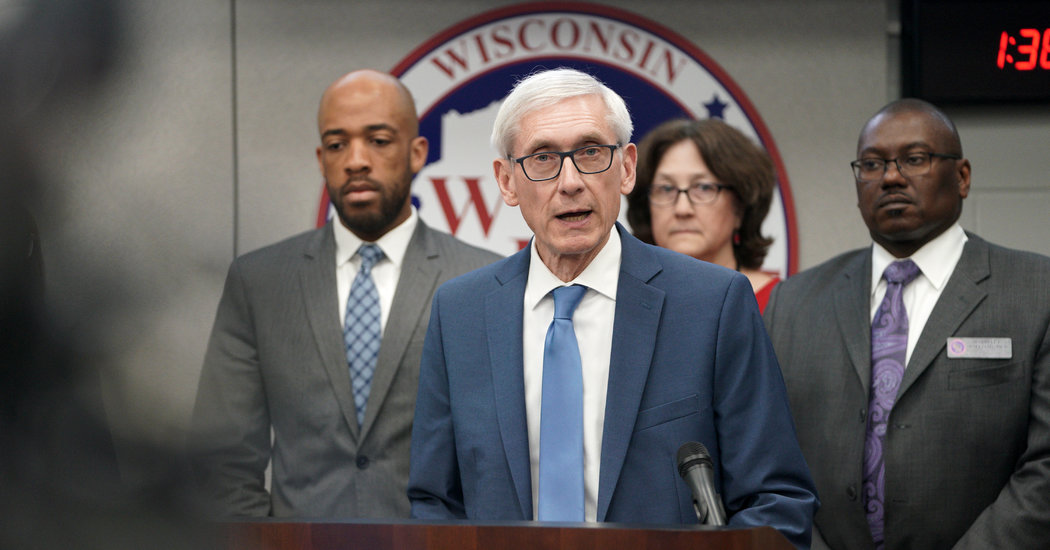 With April elections rapidly approaching in Wisconsin, local officials were issuing stark warnings about holding in-person voting amid the escalating coronavirus outbreak, saying the state was forcing voters to choose between their health and their constitutional right to vote.

For weeks, both the Democratic governor and Republican lawmakers remained unmoved, pledging to keep the polls open even as other states postponed elections. But on Friday, as the coronavirus cases in the state topped 700, Gov. Tony Evers reversed his position, instead requesting that absentee ballots be sent to every one of the state’s 3.3 million registered voters ahead of its April 7 presidential primary.

The sudden request to print and mail millions of ballots in less than two weeks, a task Republican leaders in the state immediately dismissed as impossible, is the latest example of how the pandemic is roiling democratic institutions as states across the country scramble to protect voters and poll workers.

More than a half-dozen states that were scheduled to hold presidential nominating contests in March and April have postponed them; Pennsylvania became the latest on Friday, pushing its April 28 primary to June 2. Wisconsin, if it holds firm on April 7, is poised to play a major role in the Democratic race, and perhaps a bigger one than before the changes.

It is a state that Senator Bernie Sanders won decisively in the 2016 Democratic primary, and, with 84 delegates up for grabs, one he would need to win again to lend some validity to his remaining in the race this time. A significant victory by former Vice President Joseph R. Biden Jr. would most likely lead to more calls for Mr. Sanders to end his bid and consolidate the party’s support around Mr. Biden.

In Wisconsin, the upheaval from the pandemic has set up a clash between the Democratic governor and Democratic lawmakers on one side — who want to expand voting by mail, drop photo ID requirements for absentee requests, extend deadlines for voters to return ballots and give clerks more time to count them — and the Republican majorities in the Legislature on the other, who are largely intent on moving forward with voting.

Mr. Evers cannot send the ballots on his own; he asked the Legislature to convene and approve a measure to do so. But Scott Fitzgerald, the State Senate majority leader, decried the request as a “fantasy,” and Robin Vos, the speaker of the State Assembly, said Republicans in his chamber were “united as a caucus in rejecting the governor’s request” to mail the ballots.

“Governor Evers just proposed procuring, printing, verifying and mandating the mailing of millions of ballots within 10 days. Even he knows that’s not logistically feasible,” Mr. Fitzgerald said in a statement on Friday. “In pitching this idea, the governor is lying directly to Wisconsinites about this even being remotely possible. Acting like this is doable is a hoax.”

Indeed, it was not clear on Friday, even if the Legislature complied, whether ballots could be mailed to millions of Wisconsin voters before April 7. State officials said they were still preparing for in-person voting at polling places by placing special orders for hand sanitizer and calling for volunteer poll workers.

Asked during a news conference on Friday whether there would be enough time to mail ballots to every voter, Mr. Evers said, “It ain’t gonna be easy, but we’re gonna do it.”

Mr. Evers issued a “safer at home” order earlier in the week that shuttered nonessential businesses and prohibited nonessential travel in the state, further raising questions about how the state would hold in-person voting if its citizens were supposed to stay away from public places.

“We need to recognize the impossible choice that we’re forcing on people, which is your health or the right to vote,” said Mayor Eric Genrich of Green Bay, Wisconsin’s third-largest city, which had sued the state to demand that the election be postponed. Referring to recommendations made by public health officials, he added, “There is no way for us to abide by those guidelines and at the same time administer an in-person election.”

The state is not just holding a presidential primary election on April 7, but also numerous state and local races, including a closely watched State Supreme Court race.

For the past week, local officials, particularly in some of the bigger cities, have said that they simply would not have the staff to run an in-person election because of workers’ concerns about the spread of the coronavirus. In Green Bay, 145 out of 270 poll workers have said they will not be working this election, and 90 percent of poll workers are over 60. In Madison, more than half of the workers said they would not show up. In Milwaukee, there have not been enough workers to open the city’s three early voting locations, leaving in question how it could operate 180 polling places on Election Day.

“I’ve got kids home from college, and I couldn’t, in good conscience, I would not ask them to sit in a room greeting dozens of people right now,” Tom Barrett, the mayor of Milwaukee, said in an interview. “I couldn’t expect citizens to do that either.”

The possibility that the state’s largest cities, which lean Democratic, could be forced to shutter some polling locations and relocate others, while suburban and rural Republican-leaning areas remain less compromised by the virus, has led some to wonder about possible impacts on the State Supreme Court race, one of vital importance to the state parties and often a bellwether of November voter behavior.

As of Friday, more than 760,000 voters had requested absentee ballots in Wisconsin, nearly five times the number requested during the 2018 midterm elections. The surge in requests has taxed already understaffed election clerks’ offices around the state, and has pushed a system that has never topped 10 percent voting by mail to its limit.

Republicans in the state Legislature have pointed to the absentee ballot numbers as evidence that the election can be held safely.

“I think that people are pretty smart in Wisconsin, and you hear the numbers, they’re asking for a lot of absentee ballots,” said Luther Olsen, a Republican state senator from central Wisconsin. “So if you really want to vote and vote absentee, you can do it. I would be real surprised if we have any lines waiting to vote on Election Day.”

Even before Mr. Evers’s announcement, national and state Democrats and voting rights groups had filed lawsuits seeking a delay in the election, and Democratic lawmakers were already pleading with their Republican colleagues to convene a special emergency session to help extend voting by mail.

“It just seems to me we are either sacrificing the health and lives of the community or taking away people’s right to vote,” said Gordon Hintz, the Democratic leader in the State Assembly. “I just don’t believe that we can move forward with an Election Day that puts so many people at risk.”